The Tesla Model 3 topped charts in the UK last month, selling nearly 700 models out of a total 4,321 of vehicles leaving British dealerships. The amount of Tesla’s sold speaks volumes, especially since auto-dealerships were essentially all closed for the month. To put it in perspective, car sales dropped by 97% year-over-year, but EVs trended in the opposite direction, selling 161% more than last April.

In a recent study published in Automotive world, Berylls Strategy Advisors charted the annual adoption rate of EVs as a total percentage of new car sales. Their results were quite surprising. Notibally, something happened in 2019, with the annual growth flatlining at around 5%. For comparison, in every year since 2012, growth has been at least 42%, with it usually being over 50%. A closer look at the data shows that while 2019 was the best year yet for EVS, the adoption rate is starting to flatline, largely because of the American and Chinese markets, which make up the lion’s share of all car registrations. In both these markets, sales were slightly lower than 2018, whereas Europe, with its greater charging infrastructure, made up for their diminishing sales.

Speaking of Europe, Norway led the pack by miles. Due to a combination of federal incentives which make EVs far cheaper than ICE alternatives, and their superior infrastructure, EVs made up over half of their new car sales. Compared to the US’s >2% rate, that is extremely impressive. 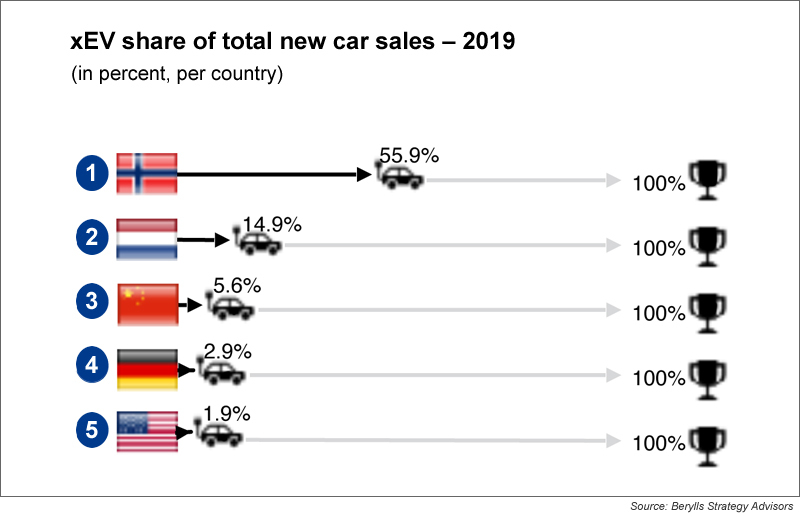 So what does all of this tell us about the future of electrification in these uncertain economic times? Well, that EVs are growing in market share, despite the Coronavirus crushing economic activity. Additionally, 2019 wasn’t that different than the prior year in terms of total EVs sold, but that could be due to anticipation of new models. With record deliveries of the Model 3, and multiple other car-makers getting prepared to sell electric SKUs, surely this slowing of growth won’t stop electrification once people start buying cars again.

Tesla: Pokemon And Minecraft Maybe Coming To Its Vehicles